There seemed to be so much rain falling in Sikkim that I began to wonder whether they had their own private monsoon.

It sounded as though it was raining all night, although ‘raining’ does not really do it justice as a weather phenomenon; that would rather be like suggesting that Lapland has a little bit of snow in the winter, or that it could sometimes be quite sunny in the Kalahari Desert.

It was hammering down.

It started whilst I was out in the evening, and it only stopped around dawn. When I went out to find some breakfast, thick, black clouds were still filling the sky, and it was much cooler than it had been the previous evening. Small rivers seemed to be hurtling along the sides of all the roads, and random lakes occupied much of the lower areas.

At first sight, I was really disappointed in Gangtok. It appeared very modern, with lots of new buildings and virtually nothing that appeared to be old. It was very clean (possibly due to it being extremely well-washed) and tidy. There seemed to be really very little for the visitor to see.

I decided to arrange to go on a trek as soon as I could.

Just to make it a little more difficult, though, all treks had to be arranged through officially approved agents, and there was technically a requirement for a minimum of four people per trek, although it was possible to do it with less.

And it wasn’t cheap.

Eventually, I ended up with a three day trip to the Yumthang valley – as far north in Sikkim as you are allowed to go – leaving the following morning. There were three of us: myself and a pleasant Swiss couple. After a lot of form-filling and passport photocopying, I handed over my money, and walked outside into the torrential rain.

The next day at dawn there was a blue sky, or at least as much of it as I could see from my window. A rain-washed blue, I’d be tempted to say. I packed, and then went off to the hotel where I was to meet the others. There I had breakfast, stored a bag for my return, and sat around reading and waiting to go.

We set off just after ten o’clock in a jeep, and I was excited to be travelling again among the high mountains with Nepalese style villages. We stopped for lunch at an inn, which again was very clean and modern. And so far, the weather had been good. We had a good view of Kanchenjunga when we left Gangtok, and by lunchtime there were just a few clouds over the mountain tops. By one fifteen we had reached Mangan, the capital of north Sikkim, and another police check post, to show our passes. Only, this time the check post was empty – apparently, the fellow was at lunch, so we had to kick our heels for twenty minutes.

I was making quick notes as we drove along, which seem to give a good snapshot of the area. And so:

Gangs of women breaking stones to mend the road.

Good and bad bits of road.

Buddhist symbols painted inside and outside buildings.

Long, long lines of prayer flags beside the road.

We reached Lachang, at 4pm, at an altitude of 8500ft or so. The hotel we were booked into was very smart and new, constructed and decorated entirely in Tibetan style. They gave us a supper of Tibetan vegetable soup, cheese momos and fruit, and then I went off for an early night. 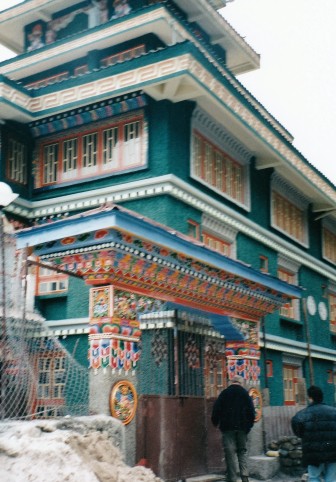 I awoke to blue skies and snow covered mountain peaks, and at seven o’clock the sun was streaming around some awesome jagged peaks towering over the village.

Seven thirty and we were on our way by jeep again. The last twenty one kilometres was through an area that is designated a ‘prohibited area’ – no one is allowed in without a permit, and cameras are strictly prohibited. Naturally, when we got to the valley there were plenty of people snapping away, despite the presence of numerous soldiers. When I saw soldiers actually posing for photographs, I decided it was probably safe to get my own camera out.

There are thirty one species of rhododendron in Sikkim.

Tibet just a few miles away.

There was a cold wind blowing up the valley from the south. Yumthang is 140km from Gangtok by road. I wonder what it is as the crow flies?

Butterflies – clouded yellow, painted lady, tortoiseshell – they all seemed to be ones that I knew from UK.

We walked 8km back and then the jeep picked us up. It was beautiful.

Hot springs just below Yumthang – a malodorous, sulphurous pool in a stone shed!

Clouds were dropping down as we headed back to Lachang for lunch.

There were a number of tall mountains to the south of the valley, and I asked our guide their names. They have no names, he replied. They are all less than 6000m, so they don’t bother naming them in Sikkim (although I’m sure that traditionally they must have had names – all the mountains seen from a town or village would have had names, even if just local ones).

I think it was at this point that I decided I would have to visit Ladakh.

In the afternoon we drove up the other side of the valley to visit Lachang Gompa. It was not a ‘working’ monastery, since the monks live down in the village. Therefore it was locked, as it is only used on full moon days and festivals. But we could at least go around the outside, to see the huge prayer wheels (and spin them) and see the beautiful frescoes. 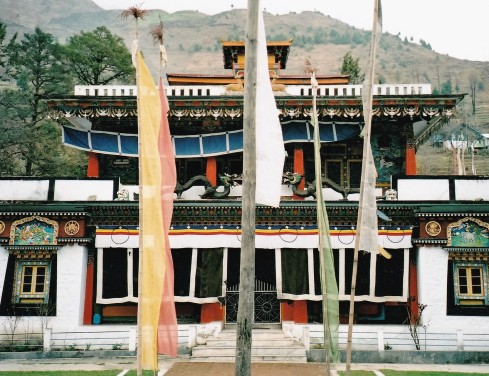 The following morning we left at 6.30 on a fine, clear morning. The idea behind leaving so early was to go to a viewpoint high above a valley, but by the time that we got there it was the usual mass of clouds drifting above and below us. Some rain at times. Sunny periods. Outlook changeable.

And so back to Gangtok.

That night it poured with rain again, and the following morning, as usual, there was thick, low clouds filling the skies and the valleys. This was followed by another heavy overnight rainstorm.

Time to move on.

I had breakfast, checked out, and went straight to the jeep park. Just after midday, I was in Kalimpong. On the way, the sky soon cleared, and it was hot sunshine long before we reached West Bengal.