I thought I’d bring you a third helping of Sri Lanka today, so to speak. These are a few of the photographs that we took when we went up into the hill country for a few days. 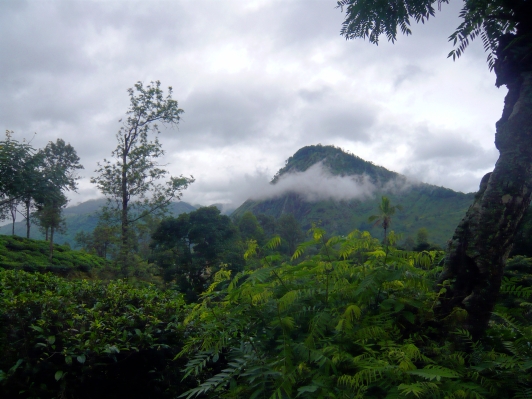 First up, a view of Ella Rock taken across the tea gardens.

Next, a view of the charming Lizzie Villa, our home for a few days. It is set in beautiful gardens, and run by our equally charming hostess, Mrs Lizzie. For the first day or so, we had good weather – rather humid and a little cloudy, but pleasant enough. But then the heavy rain arrived, and our walk from the road to the villa became an adventure in trying to avoid the leeches that magically appeared from every leaf and twig.

During one of the breaks in the weather, we walked to Little Adam’s Peak which is approximately an hour and a half’s walk from Ella to the top. On the way back, we stopped in this lovely flower-covered cafe for some late refreshments.

Tamil tea pickers in a tea garden near Nuwara Eliya. Most tea pickers in Sri lanka are still Tamils, descendants of those brought from India by the British over a hundred years ago to work in the tea gardens.

A farmstead in the jungle near Haputale.

Finally, the rather quaint railway station at Ella, which was unfortunately closed due to landslips on the line when we wanted to get the train back down to Kandy. We had left the cottage early, and a taxi had dropped us off here. But when it was apparent that the line was closed, the taxi driver very kindly loaded us back into his taxi, drove us to a bus stop and explained which bus we should get, where we should go, and what bus to take from there to Kandy. And would he let us pay him? No, he wouldn’t. Small, unexpected, kindnesses again.