It’s never too early for the first seasonal short story! 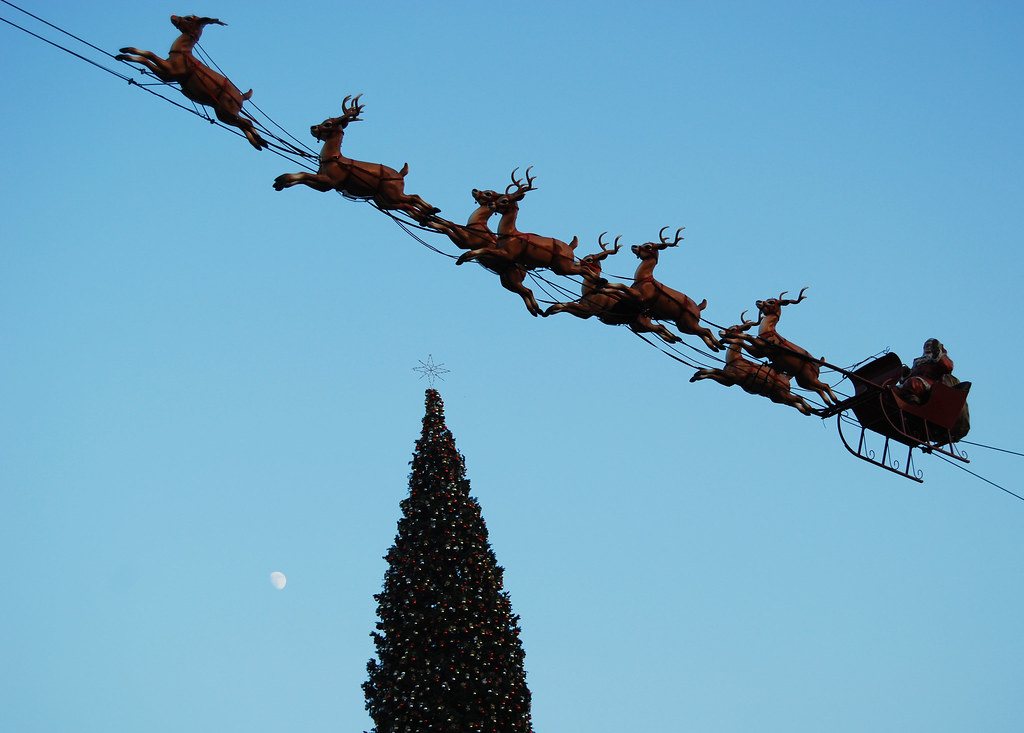 The old fellow with the white beard and the red jacket leaned queasily over the side of the sleigh, watching the snow covered fields passing below. For a while, the moon was peering out between the clouds and he travelled over a scene of sparkling silver, although the sight did nothing to cheer him up.

He hated elves, now, too. He’d never met one before today, but he knew now that he hated them. The smug little tossers sat right at the back of the sleigh, eating the mince pies that had been left out for him, and tittering whenever he took a wrong turning.

Ever since they took away his benefits and told him he would now be better off, he had struggled for money. Now it was November, and he had decided he had to get a Christmas job. Not that he was looking forward to long nights at the sorting office, or lugging a bloody great bag of Christmas cards from door to door. But it seemed he’d left it rather late, and there was nothing left. At least, nothing for someone of his age. Eventually, he found himself in a tiny little room on the second floor of a run-down office building in a backstreet, the home of an agency that he’d never heard of and with a staff, it appeared, consisting of one gentleman who he initially took to be a caretaker and who introduced himself as Mr Nicol.

‘You’ll do nicely.’ He said. With time-shift, it meant that there was no need to cram all of the deliveries into a single night; they could be spread out over the whole year. In fact, they tended to use two of them, these days.

‘Two of what?’ His mind reeled.

‘Why, Santas, of course. But even then,’ Mr Nicol went on, ‘it’s difficult when one goes sick for two weeks. And so this is where you come in. What is a problem,’ he explained, ‘is E.U. Working Time Directive no.7. This rules out night work for anyone over the age of fifty. So you’ll have to do the deliveries during the day. Still, time-shift takes care of that.’

He still didn’t entirely understand, but he took the job.

The SatNav was crap. It took twice as long. The first time he tried it, he was terrified to find the sleigh suddenly hurtling between buildings that seemed to be no more than a couple of feet apart, at what must have been close on three hundred miles an hour. It then banked and turned in a tiny back garden, subjecting him to a force of about a hundred g, and then shot back down the same terrible alleyway. It then parked itself on the rooftop next to the one that he had just left.

The elves tittered into their hands.

He quickly found it better to just leave it to the reindeer to sort out. They obviously knew what they were doing.

And then it was impossible to tell how much time had gone past. If he noticed the time in any of the houses they visited, it never made any sense. One clock said ten fifteen. Some while later, he noticed one that said nine forty two. The next said four thirty. For a while be began to check the time at each house, but quickly gave up when the times appeared to be completely random. He shrugged. More of this time-shift stuff, he supposed. It made it very hard to decide when he should be on lunch break, and he made a mental note to speak to a union rep. at some point.

Another house. Impossible to know how many he had visited. After the thing with the clocks, he was even wondering whether he still had to visit some of the ones he’d already visited.

No, that was too confusing. He shrugged again, and stepped out of the sleigh. The elves followed him with their sacks, and then they all stepped forward, and next thing they were standing in a hallway, just inside the closed front door. Yes, that was weird, too. The elves obviously knew where they were going; he followed them into a darkened front room where a little glass of liquid stood on the table beside a plate with two mince pies. There was a little note that said ‘For Santa, love Benjy’.

He dropped the mince pies into the bag that he wore around his waist for the purpose, and poured the sherry into the flask. He hated sherry, anyway, so the little tossers were welcome to that. With luck, they’d fall out of the sleigh at some point.

The elves trooped noisily out of the room and up the stairs, reached the landing and opened the first door on the right. Inside, a child was asleep in the bed, a large pillow case draped across the duvet.

‘Greedy little bastard.’ He thought. He picked up the pillow case and held it open, whilst one of the elves seemingly poured in presents randomly from his sack. And then he froze. There was someone coming up the stairs; that wasn’t supposed to happen! All this time-shift stuff was meant to mean that everyone would be asleep from the moment he entered the house until he left again. It all happened in less than a fraction of a nanosecond, in any case.

The footsteps came nearer, and then stopped. A small child appeared at the doorway, but all that he noticed were her sad eyes. She did not seem surprised to see him, nor did she appear overjoyed.

‘You never come to me.’ She said in a quiet, flat voice.

‘I visit all the children!’ He replied, struggling to present himself as jovial.

‘No. You never come to me. You never have.’ He felt himself squirming under her steady gaze.

‘Mary. I live with my mother. In one of those flats over there.’ She pointed out of the window towards a few yellow lights that seemed to randomly puncture the darkness.

He glanced at the elves, who shrugged unconcernedly, then sighed and pulled a list from his back pocket and put his reading glasses on.

‘I’m sure we, I mean I, do. What’s the address?’ She stepped towards him and gently took the list from his hand, looked at it for a minute and then pointed.

‘There. But you don’t go to our flat; number three.’

He ran his eyes down the list, clicked his tongue irritably, and then looked a second time, certain he must have missed her name. But no, it definitely wasn’t there. He looked up, to meet her gaze again. Oh, hell. He could take one present from, say, three or four others. They would never miss them, and no one would know.

‘We’d know!’ The first elf glowered at him.

‘You can’t do that!’ The other one pouted. He looked from one to the other, and then back to the little girl, and came to a decision. He reached into Benjy’s pillowcase, picked out a couple of presents and held them out to her. She did not move for a moment, but then she gently smiled, reached out, and took the nearest one. Then she turned and left the room, and he heard her footsteps going down the stairs. He darted out to the landing, but already she had vanished.

‘You’ll be in big trouble.’ A spiteful little voice behind him said happily. He said nothing but did the thing with his fingers he had been taught, and they were back in the sleigh again.

It had been their last call. Now he was watching the elves smirking and whispering to each other, as the reindeer ran smoothly through the clouds. Casually, his hand strayed towards the SatNav, and he pressed the ‘over-ride’ button. The sleigh stopped immediately, and spun round a hundred and eighty degrees, catching the elves completely by surprise and throwing them out of the sleigh and into the night sky.

31 thoughts on “The First Christmas Present”