This is a re-post of something I put up not long after I had started this blog. Since I now find that I am read by many more people than I was then, I thought I’d revise it a little and bung it up again.

Our holiday began with a couple of days home stay in Hobbiton, the only settlement of any note in the Shire. Unfortunately, this rather set the tone for the rest of the trip. Immediately, it proved impossible to pick up a mobile signal of any kind, a problem we were to encounter time and again throughout Middle Earth, which made trying to alter our travel arrangements extremely difficult. 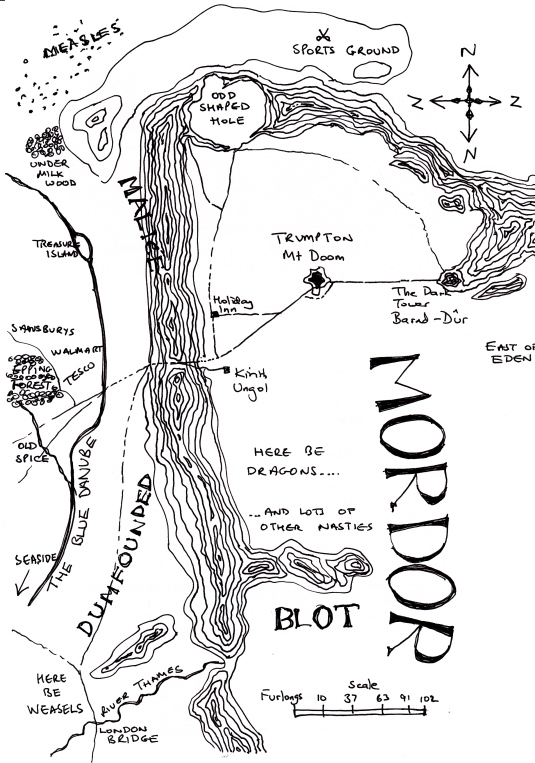 Our host claimed that we had been given what he called ‘the best room in the house’. Hole, more like, in every sense. One could be forgiven for thinking that flush toilets had never been invented. Admittedly, it was pleasant in a rather rustic, bucolic sort of way, and the meals were everything that we could have wished for, but the beds were a nightmare – ours seemed to be made for a child, and Cheryl and I lost count of the number of times we banged our heads on the low door frames.

Then, looking for entertainment, we visited three of the bars in the village, all of which advertised themselves as gastropubs, and I’m afraid that each was full of tobacco smoke and were quite simply too noisy. Incidentally, it was in the third one that we visited, that this guy we spoke to slipped me some odd ring, and since then a whole lot of strange dudes seem to be following us around.

The courier seemed a little surprised at our complaints, the following day, claiming that for most tourists Hobbiton is one of the highlights of their holiday, but agreed that we should move on a day early, if he could not find better accommodation for us. As a result of this, we went on to Lothlorien, which could not have been a greater contrast. Two days there at least made us appreciate Hobbiton – where that had been rather rough and ready, noisy and dirty, Lothlorien was simply bland, boring and anodyne. Entertainment seemed to consist solely of rather highbrow concerts and book readings, restaurants were all rather expensive and uninteresting and we felt that we should be tip-toeing around the whole time, hardly daring to speak other than in whispers. At least, though, the oddballs that had been tailing us disappeared for the duration.

But forgive me if I say little of the journey from Hobbiton. Several days through a bleak, cold and windswept landscape, with nothing to see and no accommodation other than our tents. The last part was the worst part, though. We travelled through some ghastly, cold tunnel, where we felt threatened by attack from bandits at any moment, and all sorts of dreadful noises kept happening. It was simply awful, but the courier insisted that it was normal and quite safe. I will be putting in a strongly worded complaint about him after we return.

And the problems we then had at the border were simply unreal. It seemed at first that they were not going to let us into their wretched land. The ringleader appeared to be a particularly unpleasant and overweight, orange-haired elf who was waving his arms around in a strange fashion and shouting, with a horrible bright red face. ‘Were we Dwarves? Had we not just come from Moria, which was one of the restricted lands?’ Were it not that there happened to be a judge in our caravan, I don’t think they would have let us in. As it was, the red-haired elf muttered something about locking us all up and making Lothlorien great again and stared at us most aggressively until we were out of his sight.

However, I don’t want it to sound as though it has all been bad, and that we have done nothing but complain. Possibly the best part of the trip so far, certainly for Cheryl, was staying in the eco lodge in Rohan. She was delighted that we were so close to horses the whole time, and the lodges reminded her strongly of the yurt that she stayed in on a previous trip away. Our hosts were friendly and happy to indulge us in our whims – mine to sit outside the lodge at sundown with a glass or two of the local (admittedly rather rough) ale, and Cheryl’s to help with the mucking out in the stables.

Personally, I definitely preferred Gondor, a modern, forward-looking country with a booming economy. Although some border regions are still occasionally subject to unrest, the capital, Minas Tirith, is considered by the Foreign Office to be safe to visit, although I was less than impressed when our caravan was attacked by a lone Nazgul, which succeeded in killing two of the armed escort that the travel company had provided for us for this stretch of our journey. Our courier, however, assured us that this was an unusual occurrence and that all steps would be taken to ensure that there would be no repeat. It was after this, though, that they suggested we abandon the day trip to see the ruins at Osgiliath, which was rather a disappointment, and something that we had both been looking forward to.

It was equally disappointing to find that they absolutely refused to take us to Mordor. We met a number of folk in Gondor who assured us that it is completely safe to travel there now, and that visas could be easily obtained at the border crossings. So eventually we booked a couple of nights on a houseboat there, through one of them. We did do our research, and after speaking to several of these guys, we are happy that what we are paying is a reasonable sum. After all, it may not seem much to us, but it is a lot to people living in these third world places. This did entail us having to make our own way there, but it proved easy enough to book a place on a caravan leaving tomorrow morning, through a friend of the houseboat guy who we met in a nearby bar.

One great plus here, is that the authorities apparently consider it vitally important that a good signal is available for everyone, which is very welcome after a couple of weeks of mobile coverage that has been, at best, very patchy. I would have been in touch sooner, but that has proved impossible. One consequence of this is that it has taken us some twenty minutes or so just to update our profiles.

Ah, the guy on the front desk has just called to say that these caravan dudes are here to meet us. We are packed ready, and just need to slip away without being seen by the courier. We have left him a note. I’ll keep you updated what happens!

Sent from my iPhone, Minas Morgul.