Just a few photos this time, taken on my first proper trip to India. On the only previous visit, in 1988, I had spent a manic 18 hours in Delhi, and then taken a long bus journey to Nepal. That was a journey that really should be the subject of a blog itself, sometime.

On the following year, then, I returned to India, intending to spend rather longer there this time. As it turned out, I had to return to England after a few weeks, but the short time that I was in India whetted my appetite for more. It is said that western visitors to India tend to fall into one or the other of two categories. Either they fall in love with the country, and return whenever they can, or they swear never to go within a thousand miles of it ever again.

I’ve been back about ten times. 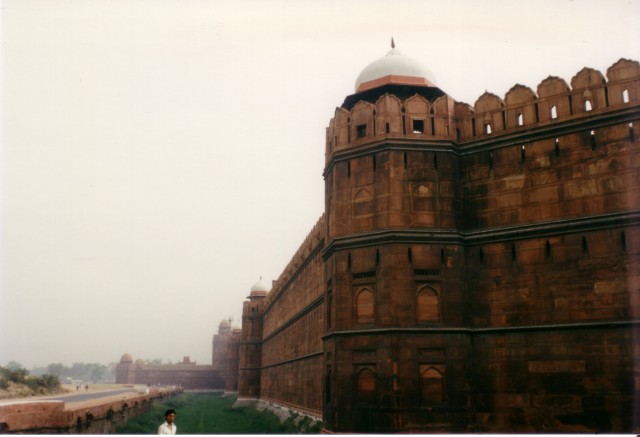 I arrived in Delhi with a copy of Lonely Planet’s ‘West Asia on a Shoestring’. In those days, the Lonely Planet tomes really were aimed at backpacking budget travellers, with their recommendations for rooms tending to be dormitories and really cheap hotels. My flight arrived in the late afternoon, so that not only was I weary from the long journey, but the light was already fading when I walked out of the airport. In the chaotic maelstrom outside of passengers and taxi drivers fighting over them, I managed to remain calm enough to locate the corner where the buses of the Ex-Servicemen’s Air Link Transport Services waited. I think they are still in operation today (I’m sure someone will tell me), with their yellow (I think) buses providing a cheap link into the centre of Delhi where I was heading.

I was dropped off near the hotel I had decided to use, the Ashok Yatri Niwas, which stood at the junction of Janpath and Ashoka Road. It has long gone, now; a great concrete monster of a place with cement beds and lifts that seemed to take half a day to do the full journey up to the top floor. I don’t think that many people mourn its going, but I was reasonably comfortable there for a couple of nights. It was where I had stayed the previous year for the one night I was in Delhi. There was hot water in the bathroom, as long as you rose early enough, and I remember the cafeteria being fairly basic, but adequate. For someone on a tight budget, it was fine. Back then, it was a case of turn up and hope there was a room, especially if you had just arrived in the country. There was no email in those days. But it was pretty big, and there was room for me.

Unlike my previous flying visit, I now had time to wander about and savour everything around me. And for the first time, it really did seem an alien and exotic society. I had enjoyed browsing in the souks (bazaars) when I had lived in Oman, and also out in the little villages there, but my first taste of India seemed to me to be as exciting and exotic as it got. Everywhere I went, I was surrounded by the noise of traffic and the odours of exhaust fumes. But the traffic was different; the buses appeared to be almost falling to pieces, loud and fierce, with people hanging off the outside as well as being crammed inside behind open, barred, windows. I saw tuk-tuks everywhere; the little three-wheeled taxis that buzzed like wasps through the traffic, squeezing through every available gap. Amongst this impatient, petulant, hooting traffic, carts pulled by horses or buffaloes plodded. Motorbike riders forced their way through, and cyclists cautiously weaved their way along. Everywhere, pedestrians took their lives in their hands to cross the roads, but the traffic all swerved out of the way for the cattle that wandered imperiously through the streets, ignoring it all.

Incredibly, through the traffic pollution so thick that you could grab handfuls of it out of the air, there were dozens of other smells assailing me everywhere I went. I was tempted every few steps by cooking foods, and then I might pass a doorway and a strong smell of incense would waft out. Seconds later, I would suddenly wrinkle my nose as I passed a pool of sewage on the sidewalk, but then immediately I might pass a fragrant flower stall.

There were temples everywhere, and a shrine of some description every few steps. Here and there were green and white mosques, stalls of old sacking and weathered boards set up outside gleaming new metal, glass and concrete shops. There were holy men jostling office workers, great hump-backed cattle and pariah dogs in corners or in the middle of the footway, beggars, shoe shiners, touts and hustlers, people in a hurry and idlers passing the time of day. I was urged to discretely change money, buy drugs, see pornographic videos, have a massage, change hotels, visit ‘my brother’s’ shop or book a trip to another part of India.

It was dirty, colourful, loud, exciting, and different and I loved it.

I walked everywhere I could, not just because I was on a tight budget, but it is always how I have got to know a place. I went to the Red Fort, on my first full day there, enjoying the relative peace and quiet inside, and it was here that I discovered Mogul architecture: The beautiful soft red stone and the marble, the carvings and inlay, the arches and columns…the only time I’d seen architecture that beautiful, before, was in Grenada, in Spain.

And now, looking at the photos I took, I am struck by an odd discrepancy. In my memory, one of the defining things about Delhi when I arrived was the incredible press of traffic. In my photos, though, there are comparatively few people, and even less traffic. Is my memory at fault? Is it just that there were obviously far fewer people in India 30 years ago? Perhaps it is chance alone.

But I think I’ll return to the architecture at a later date.