Our room looked out over what is called Amberley Swamp. We slept with the curtains open, and were woken by the pre-dawn light, although the bluey greys and purples soon gave way to greens and yellows in the low morning sun. 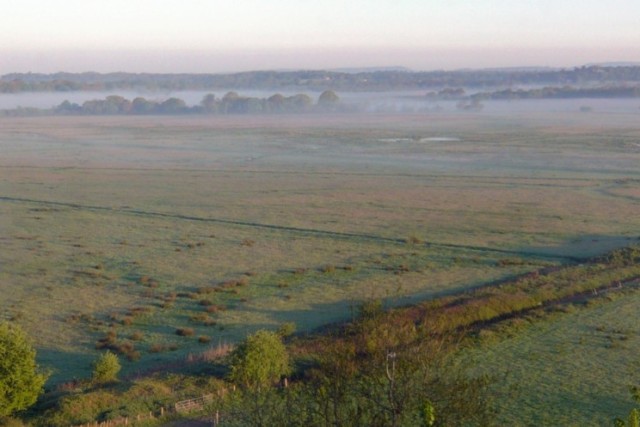 But once the sun was up, the mist contrived to linger for a while longer and the cool, still air was filled with the cries of unseen birds. Later, as we left Amberley and approached the first steep climb of the day, we saw a yellowhammer on a gatepost singing its traditional ‘a little bit of bread and no cheese’ song.

I tried to get a photo of the little perisher, though I wasn’t very successful.

This is all about the sheep, by the way.

The South Downs landscape as we know it today was largely formed by sheep. I don’t mean that large flocks of sheep sat down and planned it as a kind of Rural Development Project, but that for certainly more than a thousand years it was grazed by huge flocks of sheep whose dung helped improve the soil so that in places crops might also be grown. This led to the felling of virtually all tree cover (originally, the Downs were forested, as was most of Britain) and the establishment of the large grassland areas we associate with the Downs today.

Fans of Terry Pratchett will recall that the Mistress Weatherwax series was set in a part of Discworld that bears a large resemblance to the Chalk Downs of England. No coincidence, I am sure, as he hailed from the Wiltshire area which includes, of course, Salisbury Plain. When I read these books, I get the sense that in describing that area, he is writing of an area that is dear and special to him. There are rolling Downs and sheep and a witch who is also a shepherd living in a shepherd’s hut, which is a caravan but not as we know it, Jim.

Shepherd’s huts were the most basic of boxes on wheels, usually with a tiny shuttered glass-less window, a bunk bed, a small wood burning stove and pretty well not much else. The  hut would be up on the downs (there’s an oxymoron that’s not an oxymoron for you) for most of the year, and the shepherd would live up there looking after the sheep. Probably no chance of a day off or a night out, month after month. It was a tough life, and not at all romantic. Even getting hold of water would be a problem, with the general lack of any water at all on top of the Downs, unless they parked up near a dew pond (see part 1).

There used to be one in the grounds of the Visitor’s Centre at Exceat, near Seaford, although I’ve no idea if it is still there now.

A number of companies now make shepherd’s huts for trendy well-off folks with a bit of garden to shove them in, and charge quite a lot of money, and they are frequently much larger than the originals would have been, and fitted out in some luxury – a far cry from how they would have been when built on the farm for the shepherd. Perhaps they need a new name for them: Mock Shepherd’s Huts, perhaps.

A quick look at what Professor Google comes up with when you enter ‘Shepherd’s hut’ into the search engine reveals an overabundance of words like ‘luxurious’, ‘style’ and ‘cool’ and ‘glamping’…you get the idea.

In the first post of this series, I mentioned I had once intended to start an outdoor adventure company, which never happened. Had I done so, it was to be called Red Kite Outdoors. I mention this, as we saw a number of Red Kites towards the end of our walk. Which gives me an opportunity to include a second poor quality photo of a bird in this post.

There, don’t say I never do anything for you.

A Red Kite – just out of range of my camera.

As planned, on the last day we reached Winchester.

We cheated, incidentally. We were so tired after the penultimate day, we walked an easy path for 3 miles or so into the village / small town of West Meon, went for coffee there, had lunch, and then took the bus to Winchester.

After finding our AirBnb guesthouse (pretty damn good, actually) we went and had a look in the cathedral. It is pretty close to the end (or start) point of the walk, after all.

We stood around in the Cathedral as the choir went through their practice before Evensong. I do not know what piece they were singing, but it was a beautiful, haunting, ethereal piece. It was tempting to stay for Evensong, just to hear them sing again, but we had an appointment with a celebratory supper which I was reluctant to delay.

What better way to celebrate our arrival in Winchester?