I thought that I would pick out what might be the 10 books that have most influenced my life. Well, I say 10 books, but I may tire of this long before I reach 10, so let’s just see what happens.

You see, these are not really reviews, although it is necessary to give some idea of the plot of each book, it is more about how they have influenced me, and I may decide after a while that I’m just giving away too much about myself.

Or that I’m just going over and over the same ground.

Okay, then. Let’s get on with it. The rules:

Firstly, I must have read the book more than 5 years ago. I know this is an arbitrary figure, but any book that I have read recently is likely to be clearer in my mind, and so appear a little more important to me than it really is. It needs time to settle.

Secondly, I need to be able to demonstrate to myself exactly how it is that the book has influenced me. Just to say ‘it was important to me’ will not be enough. That would be little better than just saying ‘I like it’. Perfectly valid, but hardly the stuff of a blog post. This is another reason to impose the 5 year rule – there must have been enough time elapsed to see the influence.

So I’ll start today with Steppenwolf by Hermann Hesse. 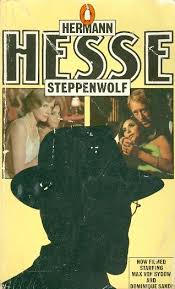 Sometimes, you get the feeling that some people have just been born into the wrong century. Not that they would prefer dressing in cravats or crinolines, although they might anyway, or that they have a hankering after a little piracy or bubonic plague, but rather you can see that they don’t fit in with the pace of modern life, or much like the ethos of the times.

There must be quite a few people like that, which must partly explain the immense popularity of Steppenwolf both when it was released, and then especially in the 1960’s and 1970’s.

It was the second book by Hesse that I had read, after cutting my teeth on ‘The Journey to the East’ as a teenager, and I was a little unprepared for its message.

Whereas ‘The Journey to the East’ felt like a bit of drug-induced fantasy, although a very clever and readable one, without any obvious message beyond ‘free yourself from the conventions of society, man’, Steppenwolf clearly had a more serious message to convey.

It begins with the protagonist, Harry, contemplating taking his own life, because he sees himself as a serious writer both at odds with the world that he lives in (Germany, post WWI), whose values, especially the bourgeois ones, he despises, but also with his inner alter ego, the very opposite of the sophisticated artist that he sees himself, which he calls the Steppenwolf – or the wolf of the steppes. He hates and fears this alter ego, who he feels he cannot control, and who sneers at everything that Harry holds dear.

It is whilst Harry is contemplating suicide, that he comes across a booklet entitled ‘Treatise on the Steppenwolf’ and as he reads it, he discovers that it is about himself. the booklet talks about Harry and his alter ego, but also explains that there are many, many more of these other sides to his character.

Through the rest of the book, Harry learns how to reconcile these many sides of himself and, more importantly, how he can manage to live in this world that up until then, he sees no value in.

When I read the part of the book that consisted of the treatise on the various different natures that made up the protagonist of the novel, it was the first indication to me that we really do have these different sides to our characters; sides that do not need to be in conflict with each other, but can coexist quite peaceably. As a typical young man, I knew that there were parts of me that yearned for safety, parts that simply wanted to rebel. Parts that enjoyed home life and parts that wanted nothing more than to wander the world with my possessions in a rucksack. There was the aesthete and there was the lover. The artist and the fighter.

Until then, the rebel in me had sneered at the home lover, and the artist seemed to be in perpetual conflict with the fighter. I had felt embarrassed by parts of my character and, just as did the hero of Steppenwolf, rather tried to repress them.

What this book did was to show me that it was natural to feel like that, and that the secret was to accept all of these sides of me, and allow them to all have their moments of dominance, and their moments of passivity. They did not need to be in conflict.

It completely changed my outlook on life.