Making Friends with the Crocodile was born early one morning – around 4 a.m. – in a Stream of Consciousness that demanded I get up out of bed and write page after page of notes on scenes and characters and the plot development. 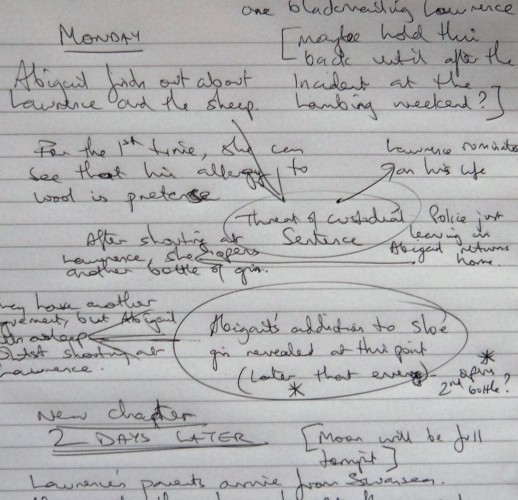 The whole novel was written in much the same way. Generally, I write as a pantser rather than a plotter – I’m terrible at planning out my writing, preferring instead to dive in and see where it takes me. But Making Friends with the Crocodile was written linearly, and other than the grammar and general tidying up, very little was changed in edit.

The book I’m working on now, though, had a far more troubled genesis. Maybe everyone has this problem with the second novel, unless it’s the second one of a planned series. I knew I wanted to write another novel that ‘said’ something, and that I wanted to set this one in India, too, but after that I went blank. I had decided to write about the English in India, or at least one of them, but had no plot.

We went on holiday, and for much of the week we were away I took a few hours out each day to work on the plot, filling my notebook with ideas and characters and working up a central theme, and once we were home again I started work on the novel.

But as I wrote, I found I was dissatisfied with the central plot. It seemed rather unlikely and, frankly, not that interesting. I didn’t even like my working title (I wonder how important that can be, psychologically?) I changed a few bits around, and turned the sub-plot into the main theme, and carried on. Eventually, I realised that I had lost interest in the whole project, despite the thirty thousand-odd words I’d written, and returned to an earlier, shelved project.

I worked on that for a while, but every now and again had ideas for the one I’d just abandoned, duly noted them down, and carried on. About three months later, I spent an afternoon going through notes and suddenly had an idea for two new sub-plots and a couple of new characters. These I liked Very Much Indeed.

I returned to the Abandoned Novel With the Uninteresting Working Title and got stuck in. I even had a new working title: A Good Place. It now stands at around seventy five thousand words, and the first draft is almost complete. There are a few gaps to fill in, but otherwise it is almost ready to put aside for a few months ready to edit.

32 thoughts on “From Genesis to Tribulation (and Beyond!)”