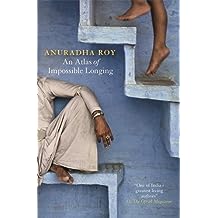 A year ago I read The Folded Earth, Anuradha Roy’s second novel, and decided it was so good I would have to read all of the others. And so recently I finished her first book, An Atlas of Impossible Longing. In this, Anuradha Roy tells the story of three generations of a family who have moved from Calcutta to live in a huge, rambling mansion in Songarh, a small town in the hills of Bengal.

Amulya’s wife, Kananbala, hates the isolation of the town, with its lack of fashionable shops and social life, and longs to return to Calcutta. Their oldest son, Kamal, longs for children, and his youngest, Nirmal, is widowed and longs for his unmarried cousin.

Everyone appears to long for something that proves unattainable, and at the centre of the story are two children, thrown together by chance circumstance and then separated by the cultural fears of adults, but who have formed an unbreakable bond that endures through years of separation.

Mukunda is an orphan of unknown caste adopted by the family, and his only companion is Bakul, daughter of Nirmal. They pass their time playing in the grounds of their home or in the woods and fields around the town.

As Bakul and Mukunda grow towards adulthood, their friendship slowly begins to become something more, and Mukunda is sent away to Calcutta by the family, suddenly fearful of the consequences of this.

As the years pass, Mukunda graduates from college and becomes prosperous, even through the years of Partition, without ever returning to see the family who raised him, although he thinks frequently of Bakul. But then chance sends him to Songarh, and he realises he must find out what has happened to her.

The pace of this book is deceptively languid, but this enables Roy to paint the characters and settings in exquisite detail, and for the plot to unfold at an easily assimilable rate.

I feel you always gain more from re-reading a book, and I am longing to do this, to immerse myself again in the rich landscape and characters Roy has created.

Most definitely a five star read.

12 thoughts on “Review of An Atlas of Impossible Longing”