It was after posting my series of poems ‘The Old Way‘, last week, and also mentioning that I’d almost completed a very long poem on a very long bus journey, that made me think of travel again. Not that that is unusual, of course. I’d nip off on another journey at the drop of a hat if I had the chance, but for the time being we can’t afford to do that.

But, I am planning to publish those poems and a whole lot more, plus a few short stories, in a book some time later this year, as well as the Indian novel I’m currently editing – A Good Place. Two book in one year! We’ll see how that pans out…

But…Spain. Mallorca, this time, to be precise. Mallorca is the largest of the Balearic islands and lies in the Mediterranean Sea about a hundred miles east of the Spanish city of Valencia.

If you were to do a Google search for Mallorca (Go on, now I’ve mentioned it you can’t resist, can you?), you would be forgiven, looking at the results, for thinking there was nothing on the island other than the city of Palma, beaches, swimming pools, hotels and night clubs.

And you would be very wrong.

Certainly, there’s plenty of that if you want it, but there is also the rest of the island, which measures approximately fifty miles by forty miles, and contains some surprisingly big hills and mountains, small villages and towns, orchards, fields and woodlands, hiking trails and Roman and Moorish remains.

I’ve only had one visit there, and after flying into Palma I took the train up into the Tramuntana, the range of mountains on the north west of the island, to the little town of Soller. From there I walked up into the mountains themselves and spent the next couple of days just wandering around and exploring, sleeping overnight in a stone refuge.

Luxury holiday accommodation at about 2000ft.

But there was a lot of rain arriving, and I retreated back to Soller for the remainder of my week, finding a room in a cheap backstreet hotel and spending the days exploring the lower hills and villages, and some of the coast nearby.

View from the window of my other luxury holiday accommodation in Soller. Lots of rain still arriving.

But it wasn’t all rain. There were lots of little villages to explore… 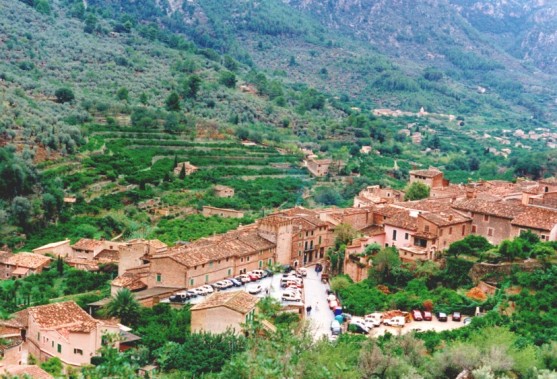 Farms, and hills to wander around in… 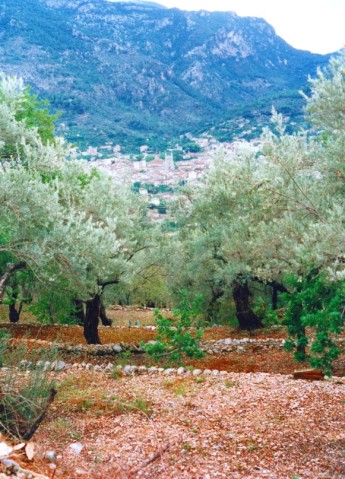 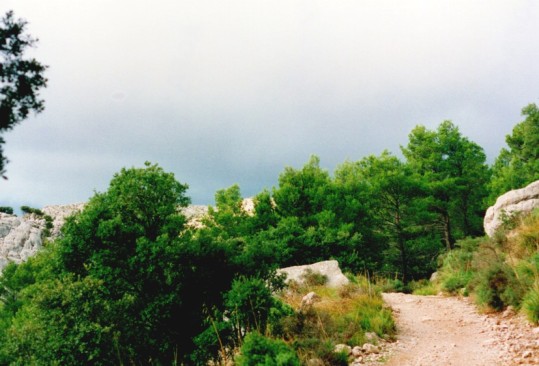 …and lots of bread and cheese and fruit and wine to enjoy. Not that you need to see a picture of that.